Originally built for the French Governor-General of Indochina in 1868 the Norodom Palace as it was then known was abandoned in 1880 when government services moved to Hanoi. When the Government of South Vietnam was established in 1954, the palace became the luxurious residence of President Diem. In 1963, the palace was abandoned after a renegade pilot in the South Vietnamese army bombed and strafed the building. The current structure was opened in 1966. One of the most striking images of the War was the sight of North Vietnamese tank 843 crashing through the palace gates marking a symbolic end to the conflict in Indochina. On a tour of the palace one can visit underground tunnels and bunkers filled with radio equipment and maps left virtually untouched since 1975. 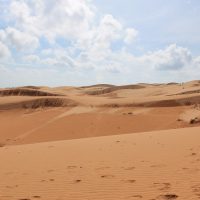